Cause of Cervical Cancer in Women and Prevent

Cervical cancer is a malignant tumor that grows in the cervix (the lowest part of the uterus is attached to the top of the vagina). This cancer is a cancer of the most dangerous and frightening. Women are particularly vulnerable to the disease.

Cervical cancer occurs because of germs. It is also strongly associated with Human Papilloma Virus (HPV). Symptoms such as vaginal discharge or watery liquid smelling, bleeding outside the menstrual cycle, bleeding after menopause, and pain in the pelvic area. 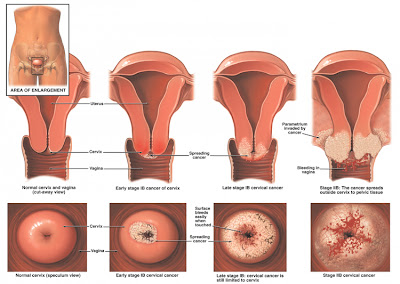 For the early detection of cervical cancer by performing the Pap smear. The Pap smear is an examination of the cervix (cervical) by using a tool called a speculum. This is done by an obstetrician or midwife. This function checks for the presence of HPV or cervical carcinoma cells causes the cancer.

This examination can be done at any time, except when she was menstruating. Pap smear should also be done every 1-year term by every woman who has had sexual intercourse.

If the Pap smear test results positive, you should immediately consult a doctor for examination and further treatment. Routine pap smear is recommended that cervical cancer faster and more likely to be found healed.

For the prevention of cervical cancer by vaccination can be done once a year. You can also encourage your husband to use a condom during sexual intercourse


Hopefully the article Cause of Cervical Cancer in Women and Prevent useful for you.
Share:

First and foremost, yay! If you are sick person? You're not in the dark anymore, and that's half the battle. Secondly, don't get discouraged. Although it might be hard to not beat yourself up over the ups and downs (it took going through an entire category of medications, endless rounds of physical therapy, multiple casts, different specialists, and taking a drug every day to stay alive. That wasn't for me I must say, I suffered HIV/Herpes since 2003 when I was raped, for me to find something to believe in that I will be save someday was tough to say of things) and the outbreak remind me on how I got the disease. After I have a chance to visit my African friend in Miami then he told me about Dr Itua who reside in west Africa(Nigeria)I know the country has a lot of sorts of things out there but i just have to trust him and I proceed with the treatment, happily I take it for two weeks as Dr Itua instructed me to so after two weeks I went for test then I found out I was cured, The herbal medicine has no side effect and I'm healthy today no more pills or outbreak I'm getting my life back now, gradually. Contact Dr Itua if you are suffering from the below diseases.....HIV/Aids, Herpes, Genital Or Oral disease, Wart, Shingles and Blisters, Cold Sore, Lupus, Chronic Lyme Disease, Alzheimer's Disease, Parkinson, Hepatitis A/B. Diabetes, Cancer. Info Contact...drituaherbalcenter@gmail.com Or Whatsapp Number...+2348149277967. ...